A question often asked is whether it’s better to put savings into super, investing or your mortgage….. this article answers this question: https://eread.com.au/incomesolutions/134906?fbclid=IwAR0TrW2OzdYJ2QX9MDe2HMHN_vaZe62D9KleStgxn6zrQW2hwuC52Is1ka0

Click on the following to enjoy the October 2021 NEWSLETTER:
https://mailchi.mp/845e27a05dbc/live-your-today-plan-your-tomorrow?fbclid=IwAR3yDWKmlXi9DFQbBNOfnsaToRme7e7TBVep2e0RLeB9qByfeQ01Bq7qMec

Follow the attached link for further details from Motivated Money ‘My Say’ No. 69:

Helping people stand on your shoulders to see further requires time and effort but the rewards can be great. As a mentor you can use your knowledge and experience to help less experienced individuals who wish to succeed and progress. Being a mentor is a way in which we can ‘hand the baton’ by sharing our skills and knowledge with those people who are coming after us, in fact many leaders believe that ‘the personal, one-on-one aspect of mentoring is something our society desperately needs’(1).

Core to being a good mentor is to have a clearly defined plan, and the plan should reflect not what you the mentor wants to teach, but what the individual being mentored wants to learn. Understanding a person’s goals and what they want to achieve will govern the direction of the mentor and mentee relationship.

A mentor should have a willingness to encourage positive behavior and choices, always acknowledging and praising discipline, hard work and good decision-making skills. However, together with encouragement and praise a mentor needs to offer correction and instruction when required. Letting someone know that because of your greater experience and knowledge you have a ‘better way of doing it’ makes you a good mentor. Offering instruction in a clear, concise, and compassionate manner allows people to adjust behavior that will assist them with achieving their goals.

Mentoring gives you the opportunity to impact the direction of an individual’s life, indeed it is reported time and time again that many successful people attribute what they have achieved to having a mentor at a pivotal time of their lives. There is something about mentoring that just makes you feel good!

At Income Solutions we welcome the opportunity of advising our clients and mentoring them through a financial partnership that allows us to clearly understand their financial goals and develop a financial plan that will ensure, at times through instruction and correction, that they achieve their life long financial objectives and aspirations.

How to be a great mentor:
https://www.youtube.com/watch?v=G3q8kEn_nsg

The role of a mentor is to: Help build your self-reliance and leadership skills. Help you discover your own insights, abilities, and solutions. (1)

There may be many of us who think we could benefit from having a mentor but how to find one? A good start is to be clear about what it is you require, a business mentor, a sporting mentor, health related mentorship or a general life coach mentor. It is important to try and clarify to yourself what it is you personally want to achieve before approaching a possible organisation or candidate.

If it is a business or professional mentor you require, some of the many options include:

Also, specifically for women, there are several women’s organisation’s that conduct mentor programs, such as:

A wonderful example of the benefits to both the mentor and the mentee is shown in the story of Madison and Cormac: CLICK HERE
Madison is an 800m Paralympic Gold medal champion and Cormac is a young person with big dreams to follow in her footsteps and become a world champion wheelchair racer and represent Australia at the Paralympics. Their connection was forged through a Mentor Clinic in Sydney that matches younger athletes with older international athletes.

In fact, the benefits of being mentored are many, including gaining practical advice, learning from others experience, increased social confidence, and being empowered to make your own decisions and develop your own strategies for dealing with professional and personal issues while keeping your goals on track.

There are individuals and programs who are just waiting to be matched with you and are trained and ready to guide and assist you to achieve your dreams and aspirations.

Click on the following link to enjoy the September 2021 Income Solutions Newsletter:
https://mailchi.mp/894e8e031e8c/income-solutions-newsletter-september-2021?fbclid=IwAR1V4oETE8osPd2woxjRbljv2G3ZkPdubn7g0SE6jLJVd7frarZ-u95xJXE

At Income Solutions we believe we have a process and focus that sets us apart from other financial advice practices. Click on the following link to understand in detail “Why Income Solutions?” : https://www.incomesolutions.com.au/wp-content/uploads/2021/05/e-book-Why-Us.pdf

On 3 March 2021 we posted a Blog titled ‘The Value of Advice’ https://www.incomesolutions.com.au/the-value-of-advice/ highlighted in this article was the fact that a professional Financial Adviser will inform, guide and provide options and choices for people to control with greater clarity their financial future, and today this has never been more evident than in a pandemic.

In a recent article appearing in ‘Professional Planner’(1), The 2021 Russell Investments Value of an Adviser Report states that Financial planners who applied a long-term strategy to investing have achieved an increased value to their clients Portfolio of approximately 5.2% during these recent COVID induced turbulent times.

By guiding clients to not pull out of their investments in March 2020, financial advisers have assisted their clients in avoiding poor investment calls that would have been simply a short-term response to a volatile market that has since forged a strong recovery. The COVID market has been one of dislocation and recovery, and during this period many investors sold out of key shareholdings following dramatic falls and then faced financial barriers to re-enter the market when it sprung to life.

Financial advisers were largely responsible for ensuring their clients were not among those who pulled approximately 40.6 billion out of their investments and superannuation.
The above 5.2% figure is made up of several elements:

The wealth management provided by an Adviser reflects a longevity of market experience.

The difference is some investors can be tempted to ‘market correct’, often making decisions when the markets are volatile, trying to time the market. While investors who are educated by their Financial Planner to know that the market will always have its ups and downs will stay the course, and evidence has shown this is what will pay off over time.


Our principal, David Ramsay wrote a Blog in 2012 titled ‘Share market is Just Human Endeavour at work’ https://www.incomesolutions.com.au/sharemarket-is-just-human-endeavour-at-work/ In this article David uses the example of Graeme Clark and the development of the Cochlear ear and the successful listing of this company on the stock exchange. However, the real inspiration behind this story is the scientific technology that was developed that allows people who have never heard to hear.

Today, almost 10 years later the inspiration of human endeavour behind the share market has never been more evident, especially using the development of the COVID vaccine to perfectly demonstrate the innovation and technology that drives share markets around the world.

Shares in Pfizer have surged to surpass its record all time high reached in 1999, hitting a high of $48.57, more than a dollar over its previous record of $47.39. This pharmaceutical giant has seen its revenue soar off the strength of it’s COVID vaccine. Of course, Pfizer isn’t the only stock benefitting from the successful development of a COVID vaccine, as Moderna is now valued at $200 billion, being now worth more than Merck with exploding vaccine sales.

The stories of human endeavor underpinning the above figures are many, but if we focus on just one, being the Pfizer vaccine development, we can build upon the earlier inspiration from Graeme Clark and the innovation behind the Cochlear ear. It needs to be noted that creating a vaccine in under a year is no small feat and is in part a reflection on global cooperation for vaccine research and distribution.

The Pfizer story starts with two German scientists, Ugur Sahin and Oezlem Tuereci, a husband-and-wife team who own a company called BioNTech. Ugur, Oezlem and BioNTech emerged from relative obscurity to produce a game changing vaccine to save lives in a pandemic, and today BioNTech stock has risen 900% since 2019 to be worth $61 billion.

Ugur and Oezlem’s daughter was recently quoted as stating in an interview that “even on their wedding day they both made time for lab work after the ceremony”. When the pandemic struck, they went to work on a project they called ‘Project lightspeed’. For Ugur and Oezlem it was not so much that they viewed the development of a COVID vaccine as an opportunity, but rather a duty as they knew they had the capacity and competence to apply the research they had already developed in working on drugs to treat cancer.

Working with Pfizer since 2018, Dr Sahin developed a friendship with Dr Albert Bourla, the Greek Chief Executive of Pfizer. Both stated they bonded over their shared background as scientists and immigrants, as Ugur migrated with his family from Turkey at aged 4 and his parents worked at the Ford Factory in Cologne.

While the people in the stories behind the share market are often individuals who are personally humble, their ambitions lie in their drive to create structures and alliances that can propel them to achieve their goals and aspirations which are often far from modest, such as creating a vaccine to save lives in a pandemic or new technologies to improve environmental outcomes.

Begin creating the structures to achieve your personal and financial goals by contacting Income Solutions: contactus@incomesolutions.com.au 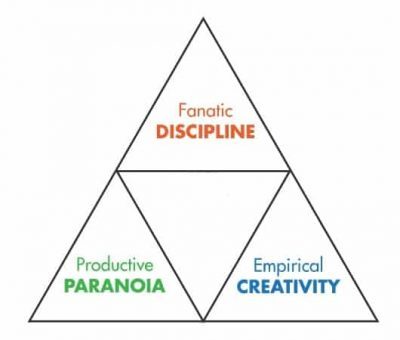 Put simply, the concept of Fanatical Discipline developed by Jim Collins in his book ‘Great by Choice’, is applying dedication and focus to the true values and beliefs that we hold, and when applied will assist us in bringing greater clarity to our career, spiritual and social life.

While in much of Jim Collins book he directly targets applying the principal of ‘Fanatical Discipline’ to company structures, this principal is easily applied to us as individuals too.

Core are the above 3 triangular headings on the pyramid Collins developed:

Continuing on at the same pace, no matter what the conditions, which is a method that Collins expands upon in the 20 Mile March – 20 Mile March
Further stating that chronic inconsistency can directly equate with a loss of direction to follow our goals.

Always being mindful that in good times there is a need to insure and prepare for the more difficult times that life can and will throw at us.

At Income Solutions when advising our clients, we adopt an investment and financial planning approach that is formulated in the above elements of discipline, innovation and the need to plan for the future.