During the five-year period 2009 through 2013, the Standard & Poor’s 500-Stock Index produced an average annual compound rate of total return of 17.91%. For the same time frame, NASDAQ returned an annualized 22.95%. Harvard University’s endowment fund earned 1.3% per year.

The people running Harvard’s money were not to be taken in, as mainstream equities hit the bottom of their greatest crash since 1929-32, by values not seen in our lifetimes, nor by prices that will never be seen again. They were entirely too sophisticated for such Neanderthal thinking.

So, it should come as no surprise that the CEO of Harvard’s endowment fund, who was paid $4.8 million in 2012, announced in June that she is stepping down. (She was the fourth person to hold this job in the last nine years)

We are responsible for helping people accumulate capital over decades, and for husbanding that capital as they withdraw from it for decades more. Thus, we are expected to offer the one thing without which the benighted individual investor must perish: a long-term and even lifetime perspective.

My perspective is that the collective of the economy’s productive enterprises will give their long-term shareholders an income stream which will continue to grow over time.

An example of this is Caterpillar Inc who’s CEO, Doug Oberhelman, recently submitted the following Press Release: ““We are proud of our long dividend history, in which Caterpillar has paid a cash dividend to our stockholders every year since the company was formed in 1925. We are equally proud that during this period, our equipment and services have helped build, grow and power the world.”

Now to capture this value, you just need to own the shares and leave them alone, which seems very easy but proves impossible for most people – even the most highly sophisticated people at Harvard. 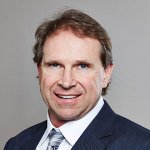